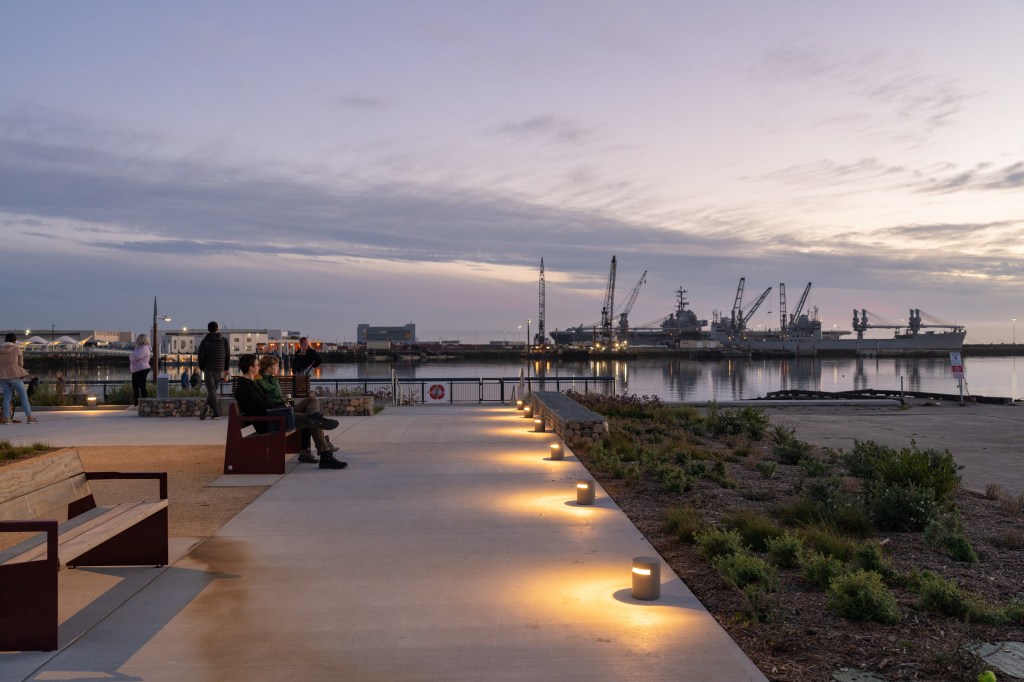 Long before West End Arts District Executive Director Tara Pilbrow moved to the Bay Area, and since 1993, when the former Alameda Naval Base was due to close four years later, developers had their eye on the windy site. With spectacular views of San Francisco and the East Bay and heaps of open space for potential new housing, commercial ventures and public art, infrastructure demands have prevented many projects from taking off. flight.

That all changed in 2014, when the joint venture group known as Alameda Point Partners won approval for a billion-dollar mixed-use, transit-oriented waterfront development. Along with 800 homes, up to 500,000 square feet of retail space, a new ferry terminal and a full-service hotel, the project includes 15 acres of public space and parkland.

Thingamajigs executive director and musician Edward Schocker says the wind facility will allow visitors to the park to meet heralds and harness the wind, an elemental force in our ecosystem.

“Tara (Pilbrow) from West End contacted us at the start of this festival. She told us how windy it was there and how difficult it would be for dance companies and other groups. Rhythmix had worked with us before and told him we like the windy stuff and had used wind sculptures in other projects.

Because the short-notice request for participation did not allow time for their typical in-depth exploration of found objects and the invention of artifacts, the band opted to ask sound artist Thingamajigs Sudhu Tewari to contribute. about six instruments and sound sculptures from a sound garden he has built over the years. Ranging from tiny to eight feet tall, the sculptures capitalize on the natural and organic forces and sounds that occur in the area.

“We want to spur creativity on how you don’t have to have electricity or go to a music store to make music. Our natural forces such as wind and water can be used,” says Schocker. “We take them for granted, but if we use facilities to raise awareness of precious resources – before the water in our minds equals only drought and the wind equals only forest fires – we discover that we we can make art out of it.”

Raising awareness of art and its accessibility, applications and rewards has also been on Pilbrow’s mind – from the day just two weeks after arriving in the Bay Area when she stood face to face with this stiff wind from Alameda Point and surveyed the terrain. As an established British choreographer and director of Tara Pilbrow Dance, she immediately recognized the potential of the region.

“The location was great; I wanted to be in space and create dance there. Then I explored the wider Bay Area art scene, discovered that the space had been empty for 20 years and needed a boost to revitalize it. This is what pushed me to get behind a desk and become an administrator. Additionally, it is the thirst of the City of Alameda, philanthropist Christopher Seiwald, local artists, and Alameda community leaders. We all got together and I thought, “We can really make a difference. ”

Acknowledging that the challenges for any developer on the site after 20 years of trying are “tremendous,” she says what makes this possible now is a community-focused project.

“The biggest difficulty was that this area should not be reserved only for housing. It doesn’t lead to a place of character and it also leads to traffic issues. Where West End Arts and Rhthymix come in, did we say, how about putting the arts at the center of this question about activities that give the space a new character? There is still a huge amount of housing, about four blocks for site A, but there is the park, the ferry terminal and expansions such as the new performing arts center which, although it is not yet concrete, is part of the vision.

The ferry, Pilbrow points out, has the potential to “be huge”. With a 15-minute ride across San Francisco Bay, one can dine, visit a brewery, see a show, or participate in or see an art presentation in the new park. “We are focusing on East Bay,” she warns, “even though the ferry is essential to open us up to the San Francisco market. Both will be important to the long-term success of Alameda Point.

The festival, she says, is intended as a first step toward “transforming people’s idea of ​​Alameda as a sleepy residential place into a vibrant arts hub.” Diversity was central when West Arts and Rhythmix selected bands representing the arts community. Pilbrow is especially pleased to have new work from AXIS dance company‘s new artistic director, Alameda resident Nadia Adame, and Fog Beast, a duo whose new work is based on shoreline themes, she says. , has intellectual rigor and is captivating and poignant. Whether it’s getting physically involved in the more interactive art or “standing still in awe of these artists,” she hopes every visitor will find a connection and an exciting experience.

Schocker, asked to dream of future events at the park, launches the imagination of its inventor: “It would be great to create a musical playground where members of the community could enjoy art. We could partner with solar energy companies, wind farms and others to create a permanent place for people to interact with the sculptures. It would be great if the festival didn’t happen and end. At the beginning, we thought of preparing a ferry with sculptures which, when going faster and slower, the instruments would make music in different pitches. Wouldn’t that be amazing? »

Lou Fancher is a freelance writer. Contact her at [email protected]