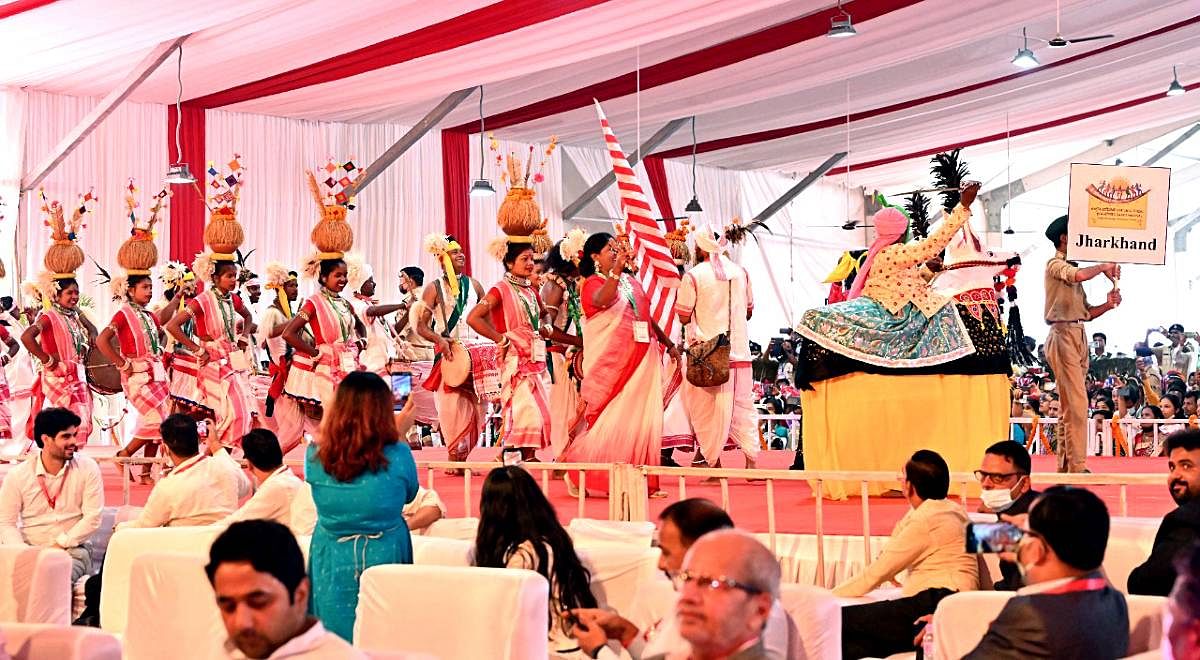 
Raipur: Stunning performances, live music and traditional arts and crafts marked the National Tribal Dance Festival, which was held in Chhattisgarh from October 28-30. After a one-year hiatus due to the Covid-19 pandemic, the annual festival is back in full swing this year, on the grounds of Science College in Raipur.

The three-day event included performances by tribal dancers from 27 Indian states and six Union Territories. The national teams competed for the top three positions with prizes worth Rs 5 lakh, Rs 3 lakh and Rs 2 lakh, respectively. The competition had two categories: a wedding dance and a traditional dance on the theme of harvest or agriculture.

Some of the highlights of the three-day event included folk dances from states like Telangana – Koya – a form of dance in which men wear horned crowns and beat on drums, while women wear brass crowns and hit the ground with sticks, and Tripura Hojagiri dance – in which women dance while swinging earthen lamps on their heads.

The festival also featured artists from seven other countries: Uzbekistan, Nigeria, Mali, Sri Lanka, Kingdom of Eswatini (Swaziland), Palestine and Uganda. Over a thousand artists participated in the event.

Speaking on the last day of the event, Baghel said, “We cannot develop, we cannot move forward, without taking the adivasis with us.”

The festival also saw unique performances by foreign participants. Team Palestine, for example, made up of girls aged 16 to 17 – high school students – performed a folk dance known as dabke. Many foreign artists also praised the reception at the festival and expressed interest in returning next year.

“It’s so amazing for us to be here. From day one, the welcome was wonderful. The people of Chhattisgarh are so wonderful, ”Benjamin Leo, an artist from Team Nigeria, told ThePrint after his group provided an energetic dance using traditional instruments like shekeres (agitators) and Sakara drums.

Team Sri Lanka group leader Vijitha Mohandas said: “We have never experienced this kind of crowd before. We came here and forgot everything about Sri Lanka! Dressed in blue and silver costumes and glittery veils, the Sri Lankan team danced with harvest bowls balanced on their heads.

The festival attracts families, schoolchildren, others

An initiative of the Chhattisgarh Tourism Board, the first national tribal dance festival was held in 2019. This year’s event was hosted with the Rajyotsava of Chattisgarh (State founding day), giving visitors the opportunity to explore tribal inspired fashion displays, tribal cuisine at food stalls. and a craft market selling local crafts.

Some stalls also featured handmade tribal furniture made only from bamboo.

People from all walks of life flocked to the festival, and the crowd included families, college kids, couples, schoolchildren and even residents of a nearby transgender shelter called Garima Greh.

“We came here to observe and respect tribal culture. Some of us from the shelter are studying for exams, so it’s a nice break for them, ”Vidya Rajput, a transgender rights activist who brought 15 residents from the house to the festival, told ThePrint.

Visitors were also relieved to exit after suffering prolonged lockdowns during the pandemic. Chhattisgarh experienced a severe wave of Covid in April, but its daily number of cases has since declined, recoveries have increased and the number of new deaths was zero on October 25.

Precautions were, however, requested by the organizers and visitors were constantly reminded to wear masks and maintain social distancing throughout the event.

“We finally have the chance to get out of our homes. Who knows if another wave [of Covid] hits, ”electrician Nileshwar Sagar Soni, who came to the festival with his wife and son, told ThePrint.

Read also : My teacher once asked me how could I be good at Sanskrit: a tribal scholar who is now a VC

India is all the more in need of free, fair, uninhibited and questioning journalism as it is facing multiple crises.

But the news media are in a crisis of their own. There have been brutal layoffs and pay cuts. The best of journalism is shrinking, giving in to crass spectacle in prime time.

ThePrint employs the best young reporters, columnists and editors. Supporting journalism of this quality requires smart, thoughtful people like you to pay the price. Whether you live in India or abroad, you can do it here.

November in Tuscaloosa will have dance, music, art and holiday events