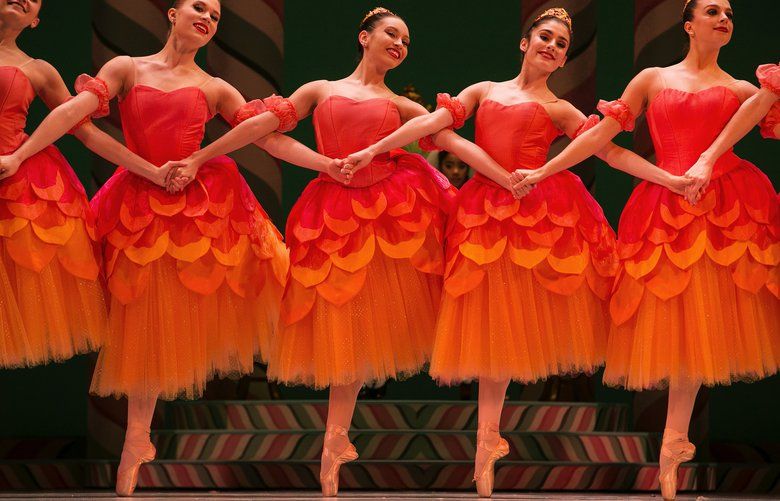 Dinner at the ‘Nutcracker’: our restaurant critic and dance / cinema expert tests the holiday classic

Bethany: Maybe you’re not completely in the holiday spirit this time around. Understandable! The world feels Grinchy, and we made it too, on the way to “NutcrackerÂ»At the Pacific Northwest Ballet by a recent and cool late afternoon. But if you’re not cheered on by herds of adorable kids all dressed in bows, throws, and velvets running around vast expanses of carpeted hall, your Christmas sadness is stronger than mine. Take yourself to “The Nutcracker”! Even a seat at the level of nosebleeds is excellent. Ah joy !!!

Moira: You can’t be cranky looking at a tiny little kid in a tiny velor blazer or red sequined cowboy boots. These and many other pint-sized enchanters paraded through the lobby of McCaw Hall, and all we could do was admire them. (And point, saying, “CUTE !!!”)

Bethany: As Moira said of a toddler, “Looks like she was wrapped in a gift!” Which was true. Bows! So many bows. An arch is just a good thing objectively.

Moira: I also noticed a little kid dressed as some sort of hipster Amish boy, in a white shirt, waistcoat, tie and teenage fedora. I am dead. This is my ghost writing. Regardless, the McCaw Hall lobby was beautifully decorated with garlands, bells, and general festivities, and I swear there was a scent of plums in the air. What are sugared almonds anyway?

Bethany: Fruit of the fairy tale! Obviously we should be eating it – I’ll do some research. In the meantime, dear readers, Moira knows all about ballet; she’s studied it for years, which makes so much sense given its effortless elegance. Everyone should have the chance to experience â€œThe Nutcrackerâ€ with her. And she tells me that we are incredibly lucky to have the Pacific Northwest Ballet as our local company because it is one of the best in the country! Also, this: “If only I could write about ballet, I would,” Moira said as we dined. Please prepare to subscribe to my new magazine, “All About Ballet With Moira Macdonald”.

Bethany: We would be forgiven for not having high expectations of PrÃ©lude, the McCaw Hall restaurant. This is a restaurant situation, not gastronomy. But we had a cozy little booth for two and a view of a soft, shiny pink Christmas tree, with, at one point, McCaw Hall’s cutest kid systematically examining every ornament on it. And the art – on a large scale, by Northwestern master Alden Mason – looks perfect. It’s a big, square room, but it manages to feel like it’s inside a gift instead of, well, adrift.

Moira: OK! I wondered why the black cod chowder was $ 27 – a lot for a soup? – but it was actually a large portion of fresh fish on a chowder, with potatoes and various other tasty things, and it was smoky and tasty.

Bethany: Moira was kind enough to share a bite of this silky luxury – I’m a jerk for sablefish.

Moira: Wait, is that sable cod? Truly? Bethany knows A LOT of this. I wish you all could have fun having dinner with her.

Bethany: I wish I could eat sablefish with everyone! And what a beautiful name. I imagine a fancy fish in a fur coat.

Moira: The kind of fish that would go to “The Nutcracker”, in disguise.

Bethany: Exactly. Then climb willingly in the creamy and light broth of the beautiful PrÃ©lude chowder. Undress first, of course! We also had a cute arugula salad ($ 12) with a few slightly leathery snow peas (unnecessary, insanely out of season) and a drop of burrata (large, always welcome), dressed all in lemon and with flower petals. edible (clearly placed there by the elves). To balance the greens, I ordered the Double R Ranch Roast Strip Loin ($ 29), which included two gigantic slices of tender, pink meat. The terribly simple side pasta seemed to have come off the kids’ menu, but overall: Bravo, Prelude.

Moira: Although tempted, we declined dessert and opted for mouse cookies during intermission – because who could pass up a frosty and sparkling mouse cookie? NOT US.

Bethany: Make sure to pre-order your intermission refreshments as soon as you arrive, as they sometimes run out of mouse cookies !? A tragic turn of events. And when you see your drinks waiting in the lobby after Act I, even though the name says “Moria,” you feel like Santa is real. I opted for the Charles Smith rosÃ©; Moira enjoyed a few bubbles. Seattle cider is another great choice for a little holiday cheer, on the dry side and almost champagne-tasting.

Moira: We expressed slight disappointment to the bartender about the lack of ‘Nutcracker’ themed cocktails (a Sugar Plum Sidecar? Mouse King Mimosa?), And he kindly offered to drop a cherry in my sparkling wine “to make it. more festive â€. Attractive!

Bethany: Such good service at every turn! Even the usher militantly ensuring that your drink was poured into a plastic cup for admission to the auditorium had a certain grumpy charm. (However, hello: these tumblers cost $ 4 !? and represent a small environmental disaster, considering that few are likely reused.)

Moira: Everyone we met at McCaw was very, very good at their job, from the bartenders to the ushers and our smiling waiter, in her Christmas earrings. Happy Holidays to all !

Moira: And, finally, to the ballet! PNB created this â€œNutcrackerâ€ in 2015, after more than 30 years of operating the Maurice Sendak / Kent Stowell version, which was popular with many. But this one, choreographed by the great George Balanchine (in 1955!) And drawn by Ian Falconer, has its own magic. We were high up on the second balcony, and yet the charming performances – and the very precise dancing – of PNB students Marissa Luu as Clara and Adam Abdi as Fritz scored high above. It’s pretty fun seeing the Nut from this high, because you can see all of Balanchine’s clever scene groups and the intricate way he organizes sets like â€œSnowâ€ and â€œFlowersâ€. Bethany, how long has it been since your last “The Nutcracker”?

Bethany: I had the privilege of seeing the very last performance of the Sendak version in 2014, which made me cry. And I really cried at the start of our Nut Experience, as well as several times throughout. The music alone – the orchestra sounded fantastic – is enough to make his heart grow many sizes. Is it fair to call the ballet one rooting effort, Moira? Is this a good dance critic speech?

Moira: Yes! I support all of the words that describe how this finest art can make us feel – lighter than air and delirious with joy. (I’m, for the record, humming this amazing tree music right now. And waving my arms, ballet-like, between strikes.)

Bethany: I have one of those times when suddenly your bed is in the dark scary forest and it’s snowing and everything’s off the scale and it’s kinda terrifying, but also so, so beautiful, and you know you have lucky to be alive, even if it’s just a dream.

Moira: Absolutely magical, right? (Fun fact: there’s a dancer under this bed, moving it around. He is known as the “bed boy”.)

Bethany: What?! I was going to ask you about some of the effects. I thought maybe giant magnets ?! But maybe we shouldn’t be digging? That the magic be magic?

Moira: There’s this really gorgeous effect in the final pas de deux which is hard to do properly – not all Sugar Plum Fairy / Cavalier duos pull it off – but Sunday night the flawless pair of Angelica Generosa and James Moore did. perfectly done. I sighed.

Bethany: I am dead. The beauty. How he’s just there to support her, but also quietly shining on his own.

Moira: Another beauty: Yuki Takahashi’s delicate pointe jump as lead Marzipan, Candy Cane Steven Loch’s dashing hoop work, and all those swirling flakes and flowers, which never fail to send me to a gloriously happy place. . But will we talk about costumes? COLORS. These â€œWaltz of Flowersâ€ â€‹â€‹tutus inspire me every year to redecorate my living room in their beautiful sunset hues. (I haven’t yet. But 2020 is looming.)

Moira: In my dreams, I wear one. And I would wear one in real life, every day, if I had one.

Bethany: The drafting would only be better. I would obviously join your ensemble!

Moira: Tutu Day at the Seattle Times! I’m going to get there !

Bethany: OK, there is one essential thing I want to say: knots and blazers are all great, but Moira, you wrote about how PNB recently adjusted the cultural awareness of this ballet, and I haven’t could help but notice that the children in the performance are very clearly gendered in a conventional way. As in, the girls have tea while the boys play leapfrog, or the boys play instruments while the girls rock dolls. PNB has to mix that up a bit. Or a lot.

Moira: Changing the choreography of this 1950s ballet isn’t something PNB can do – it requires the approval of the strict Balanchine Trust – but I agree that I would like to see it mixed up. The ballet evolves; the party scene should also evolve.

Bethany: Getting back to what’s funny: how about the giant grandpa clock with the owl on top? The decorations of this “The Nutcracker” have humor and verve in the manner of Edward-Gorey. I love sets. Sorry, “Where are the wild things”, but these sets rule the school.

Moira: They are a dream. Until the final surpriseâ€¦ which of course I won’t reveal, because Bethany gasped when she appeared and I almost cried her delight was so charming.

Moira: We arrived at McCaw grumpy and overwhelmed; we left with light spirits and dancing hearts. A holiday miracle, you might say.

Bethany: Indeed. Bless us, everyone!